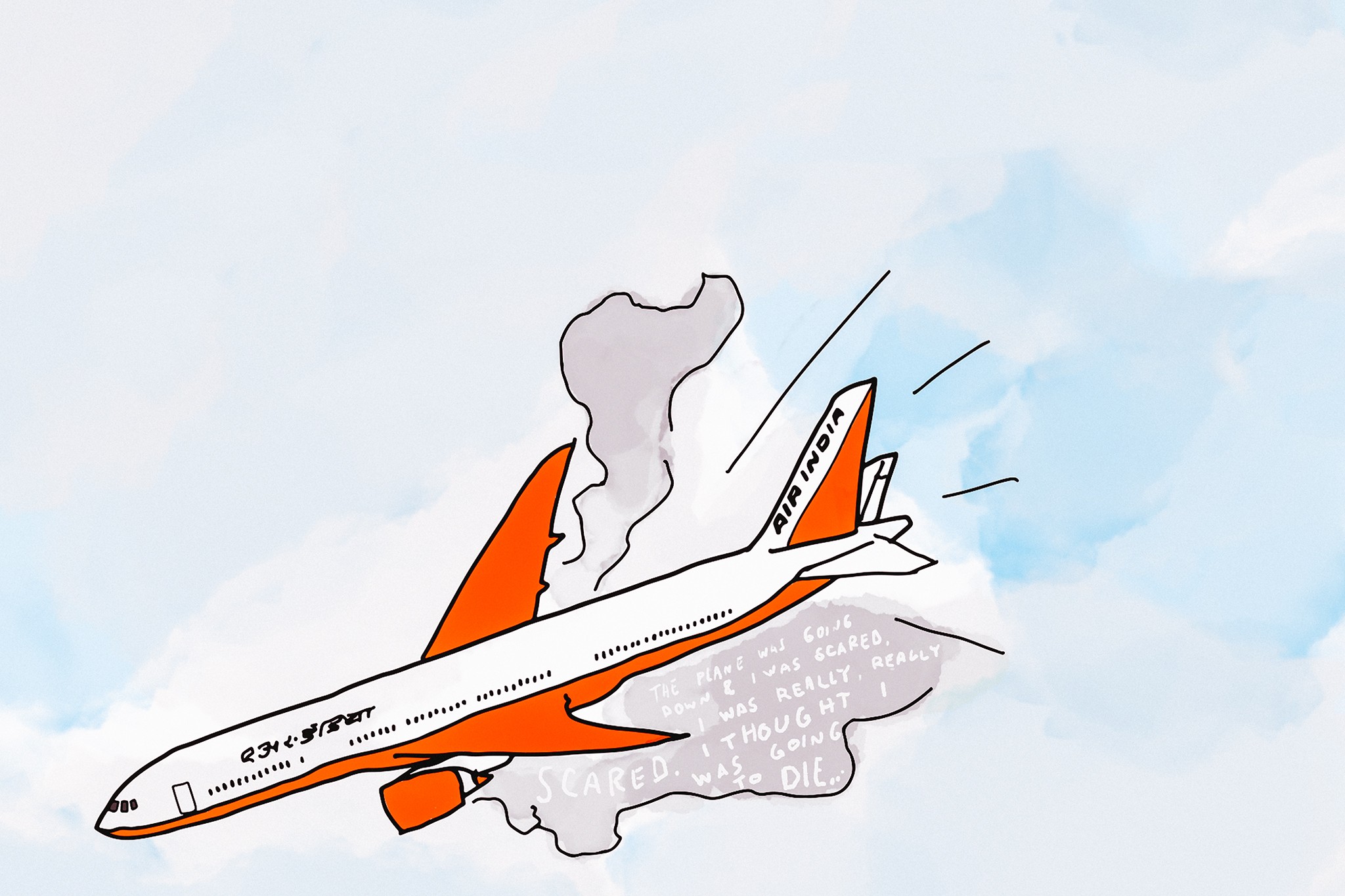 The Plane Was Going Down

I performed for Coca Cola in India almost died in a plane crash on the way.

It was April 29th, 2012 and I was headed to India for a month of touring and parkour performances for Coca-Cola. I was supposed to arrive in New Delhi on April 30th, unfortunately, that did not happen, and instead, I experienced one of my worst fears come to life.

It all started with a 7-hour bus ride from Pittsburgh to New York, as Coca-Cola was flying me out of JFK on Air India. That night I stayed with Piarry’s family, as they lived in Queens, weren’t too far from JFK and her mother just happened to work at the airport as well.

The next morning, I arrived at the airport late and couldn’t find my way to the Air India check-in. When I finally got my stuff checked and reached security, the line was immense. Fortunately, I made it through with just a few minutes to spare before my flight was scheduled to depart. I had 15 minutes to get to the gate before the cabin doors shut, so as usual, I sprinted. As I approached the gate with only minutes to go, I was abruptly pulled aside by Air India security for a “random” search. I told them that my plane was departing and was informed that it didn’t matter, as they had to assure I was not a terrorist. I was told to remove my shoes, open all my “suspicious” camera bags and then step to the side, and if I did not comply that I would be sent for a private screening. Ain’t nobody got time to get naked real quick. So I stood and watched as all of my equipment was dug up, inspecting each element carefully. The security officer who was searching me outright asked multiple times what my name was, if I was a terrorist and if I was carrying any weapons. He looked at my face, to my passport and back, asking my name once more, looking at me strangely, and then told me I was free to go. At this point, the cabin doors should have been closed, but as I approached I noticed a huge line in front of my gate and a sign that said delayed.

Almost 2 hours went by and I began to have the strangest feeling in my gut. Intuition was never something I was all that great at listening to, but I knew that I had a strange feeling about that day. Maybe it was my fear of flying and the fact that I was traveling 24 hours to the other side of the world in a giant, mechanical, bird-like death machine, or maybe my mind was trying to prepare me for what was to come. Regardless, something felt wrong. Once the plane arrived and released the passengers from the previous flight, we continued to wait in line as some maintenance was finished. And after a three-hour wait, we boarded, and off we went.

I was sitting at the back of the plane next to a man, in his mid 30’s or early 40’s, who was intrigued by my presence and wanted to have as much pointlessly mundane conversation as he could spew from his crusty lips. After about 30 minutes of listening to questions like, “How old is your mother?” “What is your middle name?” and, “Do you like the sun?” I politely told the man that, in roughly 26 hours, I would need to get off this plane and immediately start jumping off of things, and that I needed to get a little bit of rest prior. I’m not so sure he got the picture, as it was followed by an, “Oh,” and then the stream of questions continued. So in went some headphones, on went Harry Potter, and to the land of dreams I went.

About an hour later, I was woken up with a shake, and while still partially asleep, was directed to the window. “Are those the chemtrail things you see in the sky?” the man asked nervously. “No,” I responded putting my head back down, “they’re dumping jet fuel.” It hit me. Wait, why are they dumping jet fuel? And I knew at this point something was off. We were flying above the ocean and were certainly not getting ready to land, at least not on land. Thirty minutes went by, nothing was said and as they continued dumping, the confusion of the passengers grew. Finally, the pilot said what will continue to be the most terrifying words that have ever been said to me: “We are currently experiencing a technical difficulty with the plane.” I was petrified. My only thought was that those words should never be used together in the same sentence. Those words were followed by the explanation that we would try to fly thirty minutes further, and if the issue was not corrected would turn the plane around and head back to JFK.

Thirty minutes went by, the plane was turned around, and for the next hour and thirty minutes, I clenched onto the armrest tightly, waiting for something to happen. And it happened. The plane dropped viciously, with what felt like turbulence, but at a much faster rate and without leveling out. And again, the plane dropped straight down. The pilot’s voice echoed through the loudspeaker as he asked the crew to make their way to their emergency positions, and was followed by complete chaos. The crew began running back and forth frantically, people began flying up out of their seats, the aisles were lined with people on their knees praying, people were screaming and every baby on the plane had become an emergency alarm. The plane was shaking back and forth as it continued to descend vertically. I grabbed my phone, dialed my fiance and began screaming into the phone, “Piarry, I love you, the plane is going down. I’m sorry, I’m sorry.” Nothing. I entirely forgot that I was above the ocean and inside a plane with no phone service. My only thought at this point was to grab my gear and head to the back of the plane, where I had planned to jump out prior to impact. I knew I was going to die either way, but I would rather try and have my last breath in my own hands, instead of in those of someone or something else. And then came that noise. You know, the one you hear in your mind when you imagine a plane falling. It was the most terrifying noise I had ever heard, and one I thought would be my last, other than the sound of metal colliding with water accompanied by the screams of those currently around me. The pilot’s voice echoed through the speaker again, “I’m sorry, I’m sorry. We’re going to have to make an emergency water landing.” And toward the water, we continued descending. There was no possibility of us landing safely on the water with the lack of control the plane was experiencing.

Before I could stand, I heard a voice: “Hey, is this your first time in India?” it asked me gently. What the fuck. I’m not even in India, I thought. I’m on a fucking airplane headed for the god-damned ocean and you want to have a fucking conversation?! I looked to my right, and there sat man not too much older than I, who could see the fear in me despite my relatively calm composure in relation to those around us. I knew what he was trying to do. “Yeah, this is my first time in India,” I replied. “Oh, that’s cool! What are you doing here?” he said. “Performing for Coca-Cola. Parkour,” I said. He smiled with the most intense excitement, “Parkour?! I love parkour! You know, District B-13, MTV’s Ultimate Parkour Challenge, David Belle. Oh, and have you seen Damien Walters? That guy is insane!” And for a moment I was present, and there was nothing wrong. I connected with this human who knew that there was no point in spending potentially our last minutes in fear.

As our conversation continued and we continued toward the water, the two of us started panicking and our brief moment of relief came to an end. We weren’t too far now, possibly only 10 or so stories up. I could see fish flying up from the water and, during their descent, being scooped up by the birds from above. Being lifted away from their watery homes into the sky.

And our plane did just the same. I guess the pilot decided the water was not the safest option and took the plane up and around. We leveled out at maybe a thousand feet or so and, as the plane shook back and forth, we began making our descent into JFK. And after a few of the longest minutes I have ever experienced, we came smashing into the runway. We drifted side to side as the plane ground against the concrete below us. When we had stopped, everyone had jumped out of their seats in disbelief and celebration. I hugged the guy to the right of me, and even kind of reached out to the guy who had kept me awake with his pointless banter. We were alive.

The worst part of this experience? It wasn’t just that one of my biggest fears had come to fruition, but the fact that we were kept aboard the airplane for the next nine hours as a maintenance crew worked on remedying the issue and tried to get us clearance to fly again. No fucking way. I was getting off this aircraft, and so were all the angry Punjabi men that were pounding on the cabin door. Eventually, we were let go, I was put in a hotel for the night and then flew out the next day on the same airplane.

After the event, I emailed the company for a flight reimbursement and received no response. So I followed up by sending 30 or so more. Still nothing. Tried to get a better seat the following day but all I got was a single, “Ha!” by a customer service representative, and was told that I would be sitting at the back of the plane. They even managed to fuck up my return ticket, scheduling my connecting flight with one leaving three hours before I even landed. And when I had them remedy the issue they forgot to pay for the updated ticket, causing me to miss my on-time connection and ultimately have to take another Greyhound back the following morning.

I learned one thing: Never fly Air India. Ever.

If it wasn’t for the brilliant human being who manned our aircraft and brought us safely to land, a handful of beautiful people wouldn’t be on this planet today. Sincerely, thank you.