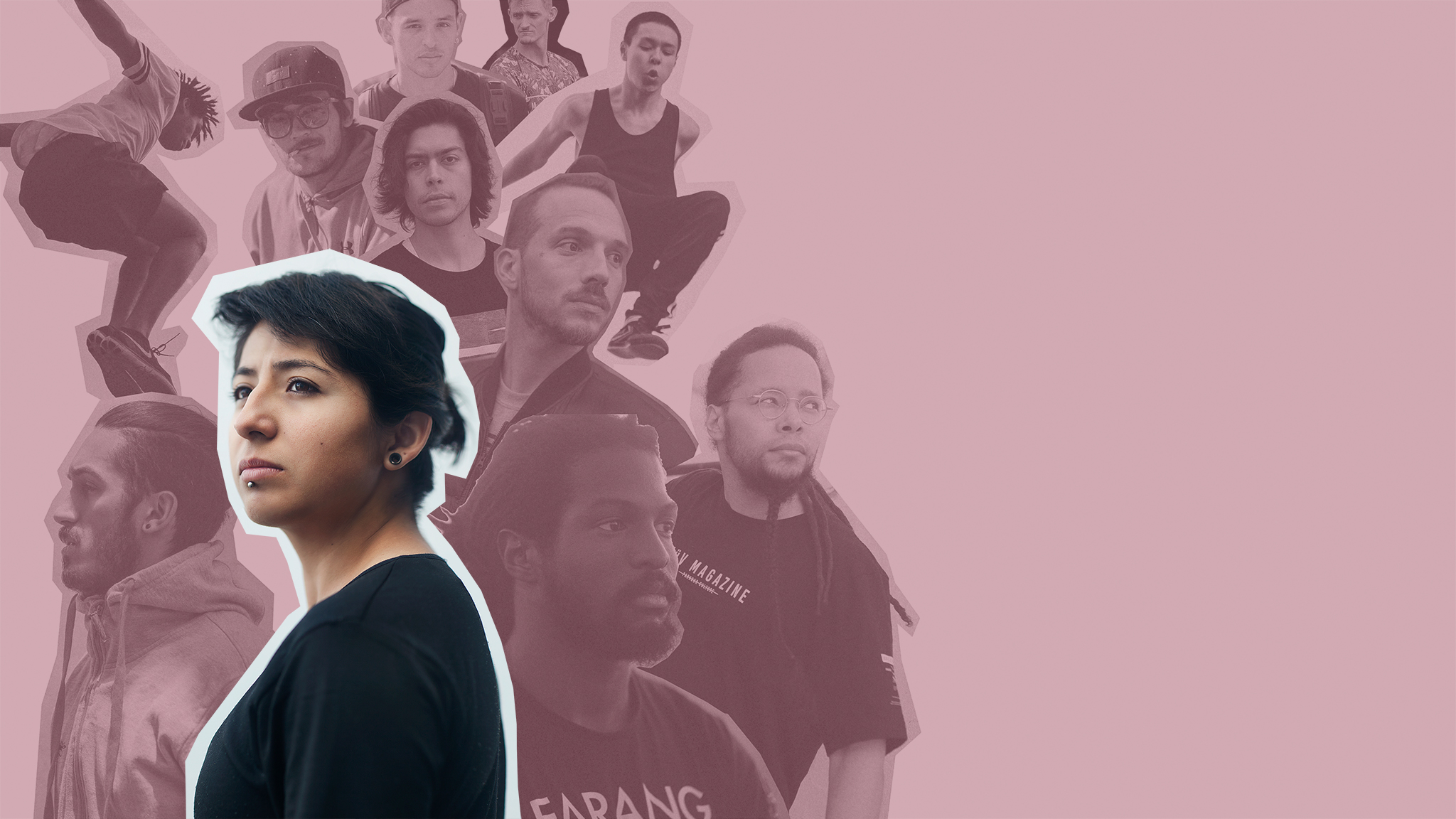 What is it like being a woman in an event full of men within a country with an overly masculine culture?

Even years after some young boys from the Parisian suburbs ran around the streets of Lisses and Evry, parkour remains a male-dominated discipline, even in age.

It has always seemed odd to me that gymnastics, a discipline with similar physical attributes could be female dominant, yet the female crossover from gymnastics to parkour is few and far between. Is there something inherently different about these two disciplines that attracts one and not the other, or is there something within the parkour community keeping women away?

In every city I have ever visited for parkour, men are the majority. Even in Mexico City, an urban jungle filled with 21.5 million inhabitants and home to one of the largest parkour communities on the planet, there is no exception. While Mexico also has one of the highest numbers of women parkour practitioners, there is still an enormous gap between male and female practitioners.

Mexico also suffers from a long history of machismo or aggressive masculine pride. Male entitlement, superiority complex, sexism, and misogyny are ingrained within Mexico’s culture and continue to be reinforced through machismo. Even after decades of fighting, it seems as if there are still places that the feminist movement and ideology of equality haven’t been able to breakthrough.

A few years ago, I was invited to Mexico’s “Reunion de Traceuses” where I learned about the impact of machismo on parkour’s culture in Mexico. Many women were unable to attend the event without being accompanied by a male companion for “their safety” while traveling or training, and because of this, the event openly invited men so that more women were capable of attending. But to my surprise, men didn’t jump at the chance to take advantage of the offer, and the event saw the highest number of female attendees alongside an exact 1:1 female to male ratio. Event organizers Skaylet SaLiinaz and Karla Castellanos González used the men’s attendance to spread the ideology of equality and equity, making certain that there was space for women to train with women and women to train without the unwanted opinions, advice, and input from men. What I saw was mutual understanding and respect between all.

Over the past three years, I’ve seen my fair share of male superiority and sexism within parkour in Mexico – from the use of derogatory, sexist language around women (and in general), to unwanted advice and advances while training. I wanted to know whether machismo had its space within parkour culture and whether it was one of the potential factors in the amount of female participation within the discipline.

So what is it like being a woman in a national event full of men within a country with an overly masculine culture?

For Angelica, it’s complicated, and the same macho culture from the outside world seems to exist within her parkour space. “Here in Mexico, they call me a whore because I train around many other men,” Angelica says, “and many of them try to flirt with me or make sexual advances, so I need to create my own space and raise my own spirit to work through it.”

Here in Mexico, they call me a whore because I train around many other men.

Unlike the others, a young mother to one of the jam’s participants, Dhalia, feels “safe” within the male-dominated training environment. She believes that “many young people are changing their minds,” and with them, the old ideologies of inequality. While she still sees many older people clinging to hateful ideas and actions, she sees hope in the younger generation.

Thamara Monroy, a long-time practitioner from Mexico City, tries to look at both sides and sees something different. “Many women that I know haven’t had the chance to be around 50 or 100 men, being able to do what they want while being respected,” she says. She believes that through parkour, she has surrounded herself with a particular type of men. “I feel very supported by many of them,” she says, and coming to this event, she was “welcomed with an amount of love that I had almost forgotten because I wasn’t here.” And for the times that she didn’t feel respected because a man was giving her unwanted advice or started moving in a space where she was already moving, when they were confronted, she was met with honest apologies.

While some machismo influence within Mexico’s parkour scene seems to linger, something within parkour also creates a space where it is more difficult for inequality to exist. But how much machismo is actually present within parkour here, and what does it look like?

Thamara sees a lot of it within competitive nature and our desire to thoughtlessly outperform others and ourselves. “I see it in both men and women,” she adds, “And we start to say things like, ‘I need to be better!’ But what does that mean?” The problem is that many here don’t have an honest answer, and more than being better, they’re looking for notoriety from their peers. “It’s a very masculine way to grow for younger boys. It’s like you need hit them, and push them, and be kind of mean with them for them to become stronger – and I see a lot of that in parkour,” Thamara adds. She doesn’t see it as much between people but how we treat ourselves. Even if we’re injured, or something hurts, we’ll decide to push through the pain and continue anyway. “It’s the way that we learn,” Thamara says, “and I say we because I also feel my masculine side learning that. It’s a way for us to give value to ourselves by showing that we are strong.” However, strength comes in many different shapes, and she feels that parkour tends to take the most masculine one. “This battle and this confrontation – it’s nice to have that because sometimes we use that kind of strength, but there are also more subtle strengths.” Like being capable of saying I don’t want to do something if I don’t feel it, but there tends to be an opposition to that form of strength that is seen as a weakness, and while she feels that it stems from a cultural dialogue, she hears it a lot within parkour as well. “I hear it when we don’t do some jump: ‘Yeah because I’m a pussy…'” And it’s words like those coming from our mouths that may turn women away from wanting to take part in the community or at all.

Many women that I know haven’t had the chance to be around 50 or 100 men, being able to do what they want while being respected.

After talking with many women within the jam space, one thing seemed to be certain: men providing unwanted advice was constant. “Many men here try to help or offer advice without asking,” says Herme Castro, a young practitioner from Mexico City. “Many of them also think that because I’m a girl, I’m not capable of doing something, which is why they come to help in the first place,” she adds. Just as men want the space to work through things, women want the same, and this issue isn’t an issue that is exclusive to women, but one seen throughout our practice. If you are someone who enjoys sharing knowledge or helping others, instead of just providing them with what you believe they need, why not ask if they’re interested in your help? By asking, not only are you making an honest effort to connect with an individual as an equal, but you are also showing them and the space you share the respect they deserve.

“It’s not black and white,” Thamara says, feeling that too much weight is given to one perspective, as the opposing side and everything in between is undervalued or ignored entirely. Just because the issues exist doesn’t mean that every man is at fault. There are men doing beautiful things, not just for parkour but in general, and it’s important that those things are recognized. And once they are, then what? What needs to change for the current and future women of parkour to create a more conducive environment for them?

For Herme, it’s important that women step up to inspire other women to participate, but also to empower women who are already training through exhibitions, tutorials, and free classes. While Dhalia hasn’t experienced or seen the same struggles within parkour, she has in everyday life and believes that women need to learn to say no. “The time is now,” she says, “for us, it was forbidden” as Mexico’s conservative and macho culture didn’t allow the space for that no to exist. And now? Dhalia says, “We are learning to say no.”

As for Thamara, she has heard the question, “What do you girls need to feel better here?” far too many times over the years. “It’s not like telling you to not say bad words in front of me,” she says, and for her, that’s like an incomplete recipe. “I believe the feminine side of parkour has a lot to give to the masculine side,” Thamara adds, “If we take these masculine and feminine energies, what can we create from them? We already see a lot of the masculine side here, but the feminine side is missing.” And this idea is something that she intends to work on. “Come back in a year, and you’ll see,” she says half-jokingly with a big smile on her face.

I believe the feminine side of parkour has a lot to give the masculine side.

While Thamara is out bringing the change she wants to see within the world, we can begin to learn to be honest with ourselves and the people around us, learn to respect our environment and work towards the conscious understanding that we’re all human. Maybe then, you’ll see more women coming out to play, and parkour can become the all-inclusive club we imagine it to be.