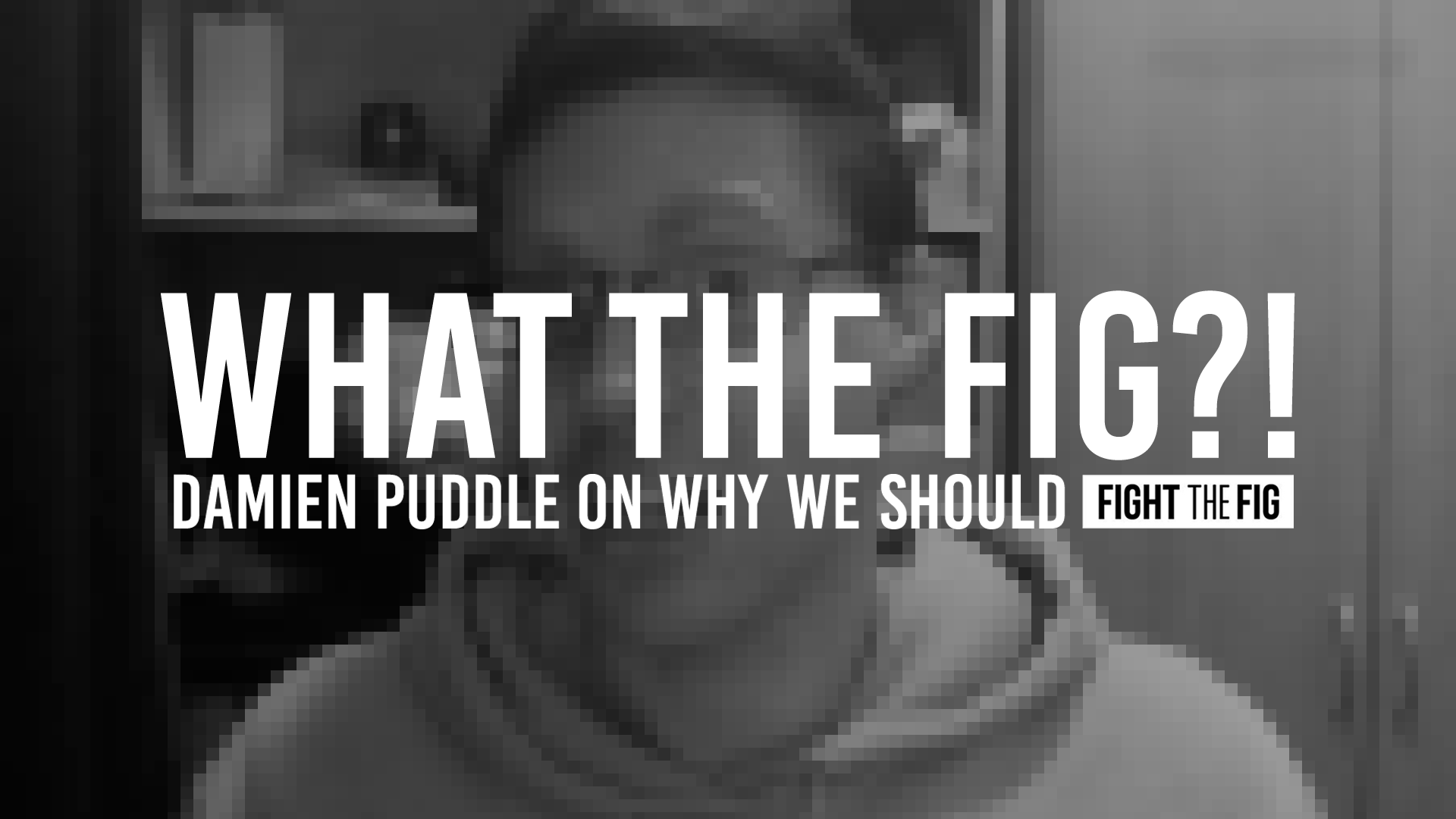 Some people (and I don’t mean to pick on Jason, he just happened to release his video while I was writing this) have suggested that we should hold off on rallying against FIG when we don’t know all the details. Others (and I mean to pick on Rene and Dylan because they made excellent points and released their media while I was writing this) have said that we know enough to realize that working with F.I.G. = B.A.D.

Jason happened to mention that the athletes going to FISE are athletes, not people who are good at writing essays and putting their opinions out on the internet. I agree. A lot of athletes are not great spokespersons or researchers. Unfortunately, as Rene points out, these same athletes are the commodity here. Their participation is what give FIG power.

The International Gymnastics Federation want parkour for themselves. I’m sorry, this is indisputable. But, we’re not seers, so we don’t know what the exact future of parkour under FIG would look like. We need to look at our sister activities who set a precedent for us.

Parkour is typically classed as an action sport. Sports that are primarily non-competitive “lifestyle” activities, though most also have competitive structures as well. There are many, and almost all of them have controversial experiences and current realities that are not only telling us the answer, they’re screaming it at us. I’m going to discuss some histories of these activities and summaries some takeaways for us, drawing on international, national (particularly NZ because that’s where I’m from), and Olympic perspectives.

Also, see my previous article ‘Parkour in the Olympics: Lessons from Agenda 2020 Action Sports Symposium’ for some further background information.

Windsurfing is supported by the International Windsurfing Association, however, the IOC only recognize World Sailing, and so World Sailing has been in charge of windsurfing at the Olympic level since its inclusion in 1984. In 2012, World Sailing (then called ISAF) voted to remove windsurfing from the Rio 2016 Olympics onward. Huge backlash, including this petition, eventually overturned the decision.

Although windsurfing in New Zealand is governed by Windsurfing New Zealand, Yachting New Zealand is in charge of windsurfing as it pertains to the Olympics (e.g. selection), because they are affiliates of World Sailing. This means that $ from the IOC to develop windsurfing goes to Yachting NZ who then gets to decide where to spend their money. At the Agenda 2020 Action Sports Symposium the Windsurfing delegate said that they see very little of this money, despite their rights to it.

You can read this brief history of BMX, or read this longer one including an hour long documentary of BMX’s road to the Olympics.

The International BMX Federation was established in 1981 but has since been consumed by Union Cycliste International. No doubt, the fact that cycling and BMX both use bicycles is the reason why UCI integrated IBF.

“BMX rapidly developed a unique sporting identity and it became evident that the sport had more in common with cycling than motorcycling. This was officially recognized in 1993 when BMX was fully integrated into the International Cycling Union (UCI).”

There does appear to be an International BMX Freestyle Federation as well.

BMX NZ fully comes under Cycling NZ as one of their sporting disciplines. That means that funding from the IOC goes to Cycling NZ who get to decide where to spend it. In 2015, $1.6million of Cycling NZ’s $6.2million high-performance budget went to track cycling, versus $291k to BMX ($98k to Road Cycling, $14k to Mountain Biking).

This has resulted in a messy dual governance system and endless controversies between the WSF/snowboarding community and FIS/IOC. Including recent events where FIS failed to listen to the snowboard community ahead of Sochi Olympics and built terrible halfpipe, and that the only way to qualify for the new Sochi slope-style event is to do so via FIS competitions, not the other industry based events that snowboarders actually care about. This was approved by the IOC.

Although many skateboarders don’t want skateboarding in the Olympics at all; Thrasher sums it up in a way that only skaters could, there has been a lot of conversation with various people over the years about bringing it into the Olympics. BUT…

“According to Simone Masserini executive director of FIRS, the IOC approached FIRS in February 2014 about pitching skateboarding as an Olympic sport at Tokyo.”

The IO flipping C, loving the taste of that sweet sweet money (I’m getting tired and irritable now, so I have no love for these guys), asked the International Roller Sports Federation to govern skateboarding. Although there may be more that happened – I don’t know all the ins and outs – that seems like it wasn’t even FIRS who had the idea. The IOC gave approval for the FIRS to handle skateboarding at the Olympics, but (and look at how much they care/know about skateboarding – not much there is there?) they soon realised that they needed the ISF if it was going to work at all.

It almost all fell apart when “During a May 24th conference call between the IOC Sport department, the ISF, and FIRS, the ISF learned that FIRS wanted to host and govern its own world championship skateboarding events. The ISF crew interpreted that as a direct attempt to infringe on the existing international competition infrastructure.” …after lots of heated debate and fighting, FIRS backed down and won’t run any comps, but “Together, the federations make up the Tokyo 2020 Skateboarding Commission (TSC).”

That seems like at least a partial win, but as soon as another federation gets involved, it causes major headaches – Like Brazil recognizing the Brazil Roller Sport and Hockey Confederation as the body responsible for organizing the qualifying skateboarding events, even though they have zero experience and the Brazil Confederation of Skate have been organizing competitions for almost 20 years. Naturally, FIRS is supporting it.

Climbing, like most of these action sports, can be experienced in many different ways. Under the auspices of the International Federation of Sport Climbing, (IFSC) climbing is now going to be included in the Tokyo 2020 Olympic Games.

Controversially, the format is essentially a “vertical triathlon”, an aggregated score from athletes success at bouldering, lead climbing and sport climbing. The decision to combine the three climbing disciplines was made WITHOUT consultation with the IFSC (their original submission had the events separated with an additional overall medal).

Because the climbing world cup events are now qualifying events for the Olympics, the formats of these events will include the combined medal. This is going to change the way climbers climb. Some key athletes share their thoughts.

OCR is getting more popular and many OCR event organisers want to get it into the Olympics. And it looks like the International Union of Modern Pentathlon (UIPM) agree.

“Dr. Klaus Schormann, for one, was highly pleased. The successful execution of this demonstration sport in Pomona, said Schormann, president of the UIPM, “is a logical step in the evolution” of “our beloved Olympic Sport of Modern Pentathlon,” and “forms part of a confident application by UIPM for the Mixed Relay to be added to the program of the Summer Olympic Games in Tokyo in 2020.”

“First, the UIPM’s strategy of having the Mixed Relay included in future Olympic Games programs starting with Tokyo 2020 was discussed at length. It was unanimously agreed that this innovative format will include Obstacle Course Racing as part of the Laser-Run discipline. This addition, with strong ties to the historical traditions of the Modern Pentathlon, will add additional value to the Modern Pentathlon event, and the Games itself, and UIPM will campaign strongly for its inclusion.“ (Does this sound like a familiar refrain to you?)

And just a little bit on the IOC being money hungry. And how their funding structure works:

The IOC gives money to their affiliated International Federations (IFs) as well as to National Olympic Committees (NOCs). Based on this annual report from GymSports New Zealand (soon to by Gymnastics New Zealand), that money is then distributed from the NOCs to the national sports federations. It doesn’t appear as if IF money goes to the national federations. See this handy breakdown of the US structure.

If we take the above action sports precedents into consideration, working with or supporting FIG in any way would likely result in letting parkour be governed by an international federation that:

WHY!? If this is the experience of all action sports before us, why would anyone do anything but work with their own community?